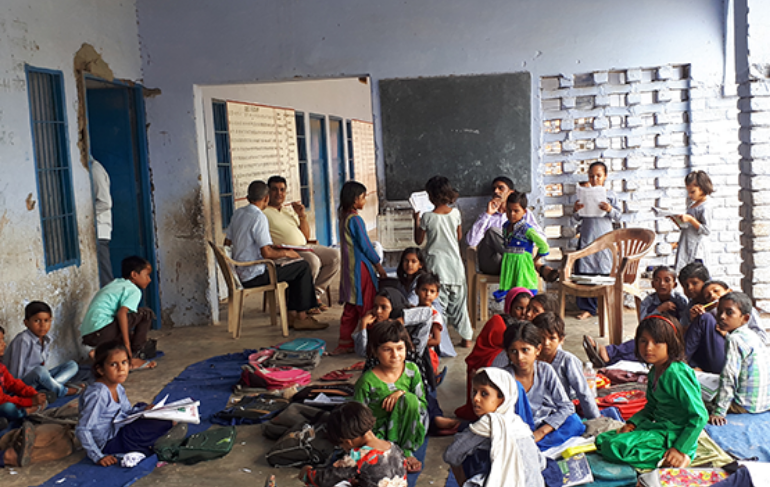 With the mission to find the right school to create access to safe drinking water for children, the Sarvajal team set out with an open mind. The secondary data search took the team to the districtof Mewat in Haryana. Apportioned as a separate district from Gurgaon in 2005,Mewat had alarmingly low indicators of education, health, standard of living, public infrastructure and services.

Being a semi-arid region with highly saline ground water, there is an acute drinking water shortage in the villages in Mewat, to the extent that they are dependent on the neighboring villages for water. The district also grapples with an unhygienic environment and appalling living conditions. This, together with minimal health infrastructure, further weighs down on its population’s health.

In comparison to the rest of Haryana, Mewat’s sex ratio indicated a favorable trend in the last census, but in contrast to it, the literacy rate among females is far lower than that of the males in the same district. The conservative families of the region preferred to bestow an edge to their male children by sending them off to other districts or private schools for education. As usual, a girl child is often burdened with household choresor married early and may not get to see the lights of a classroom. A study commissioned by Niti Aayog also cited the reason for girls dropping out of school, as the burden of fetching water for the family. This sets the vicious cycle of a girl’s life, in motion. Only girl children who are fortunate enough would find their way to a government school. Given this, odds are that we still would find more girl children in the Government Primary Schools than boys. 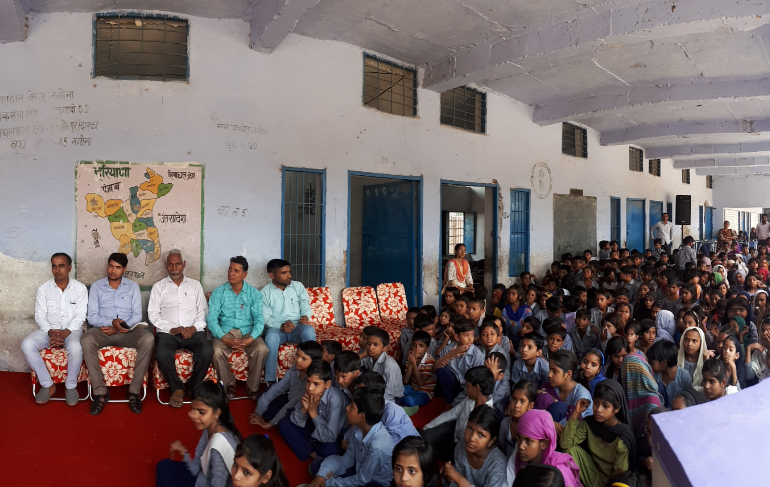 All that was not right in the district of Mewat made it just the right choice for a Sarvajal intervention – the school that was selected was the Government Primary School in Nagina. 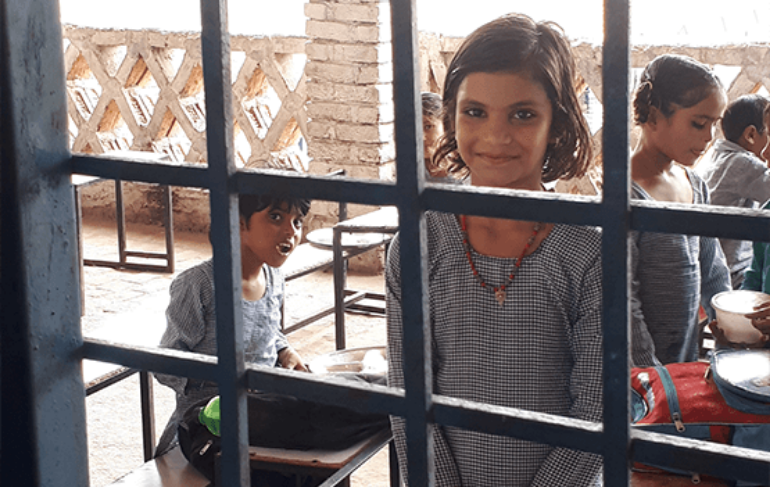 Located in Nagina,one of the 5 blocks of Mewat,the school was established in 1964. The school has 830 students, 23 class rooms, 18 teachers(in the place of 32)and 8 cooks to take care of noon meal scheme. A broad range of issues prevents the school from thriving — the infrastructure, dilapidated toilets, furniture that needed fixing and more.The school had just the bare minimum – the head master’s room is a witness to it.

But the greatest of the hazards to health of the children was the large dumping ground in front of the school – stagnant water from sewages modeled a home to many a pig family. Swarms of houseflies that enveloped everything around could send a chill down any unsuspecting visitor’s spine. It reminds you of the hard task that rests squarely on the Swachh Bharat Abhiyaan with our Prime Minister as the key champion. It also reminds you of the indifference that plagues our society – the resultant inaction.

The water sources are two, a tubewell with 2000 TDS and waterfrom supply stored in a reservoir. When these were not enough school bought tanks of water. The school did not have enough assistance to buy water all the time. 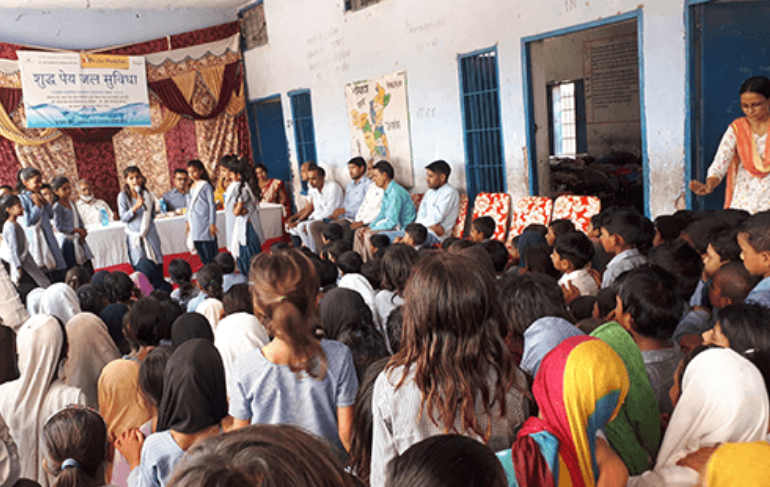 Arun from VI standard has a great smile but dental fluorosis has already made his teeth opaque with a brown stain a sign of degeneration of teeth. His father works as a peon in the bank, he lives in a joint family and has around 14 members in it. He does not bring water from home but he drinks many times from the plant, since his class is the closest to the water spout. Many children in the school have opaque teeth like his, though it is not reversible, further erosion can be prevented if they avoid water with high fluoride.

Sarvajal through a CSR partnership with Dr. Lal Path Lab established a 500 LPH purification plant at this school on April 26 2018. The water is purified with RO and UV/UF technology and made available for children to drink through the day. 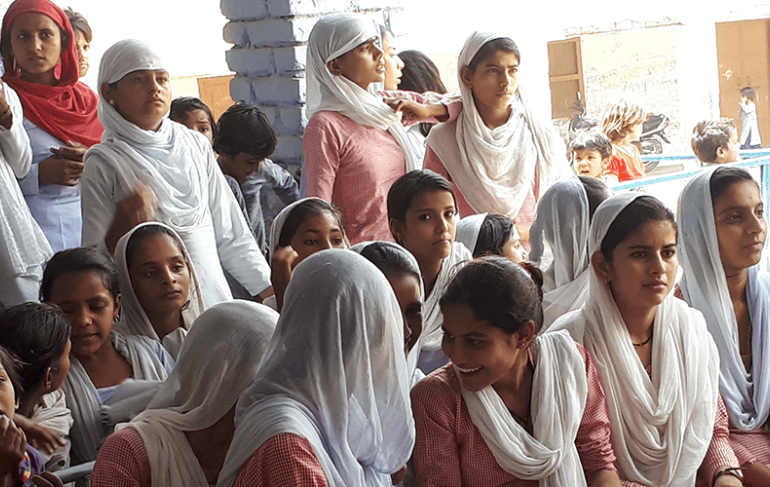 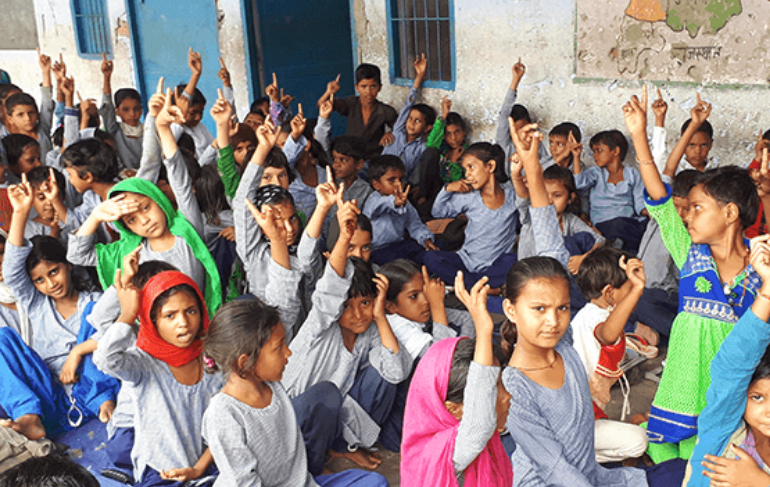 Rinku who studies in 4th standard,aims to become a teacher one day

The students belong to under privileged migrant community that earns a living as farm laborers. While female literacy is only 27% in Nagina, the fact theschool has 436 girlsto 394 boys made the Sarvajal’s team hopeful. One of the women teachers confirmed that throughout Mewat this would be the normal- as boys get to go to private schools and the girls’ enrollment in government primary school would be higher. Girls would be taken off the school as soon as they have siblings to take care. The double standards for girls and boys very visible andshocking but the team’s resolve to work in that school strengthened.

Ganga in class fourth brings her little brother who is two and half years old with her to school, her mom works in the field, the little one would get noon meals ( a generous portion of Kichri ) and water carefully fed by his sister – the school would allow that, if not the parents may withdraw her from school.

Rinku in the same class comes from a large family of 14 people, her father and his brothers live in the same house. She has 3brothers, who go to a private school Arya Samaj School in Nagina. She lives far away from the school and have to walk for an hour to get to school. She brings water in the blue bottle and fills it twice in the day. She smiled a shy smile when she told she wanted to be a teacher.

With the focus of the child picking up the beached starfishes and throwing them into the sea one by one to make a difference to that particular starfish, Sarvajal saw an opportunity to serve safe drinking water to the girls studying in the government school. 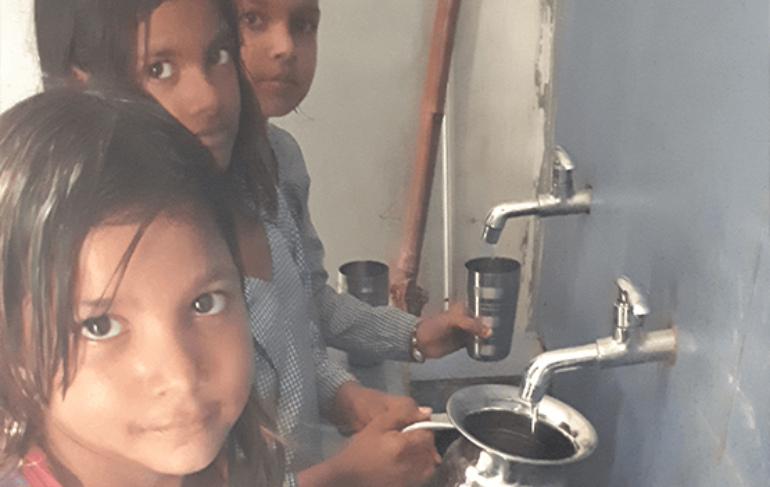 Children are not deterred to play in the scorching sun anymore

Generally, children of primary school age need at least 3-4 glasses of water during the day with the number going higher in summers when the temperature is at its peak.The scorching sun seldom deters the spirited young children from running around in rigorous catch-me-if-you-can-games during lunch break. Bare feet, and hot sand notatall a matter.This is all the more reason to situate drinking waterat a convenient, easy-to-run-to and safe location.The ease has to be from an access point of view that encourages these young sun-braving hearts to drink regularly. With the safety highlight, the water needs to lure them in taste and motivate them to return to it many times a day – it truly sounds like a mother’s job. “Paani peethe rahna beta – dhoop tej hai”

Even running in groups from one building to another aimlessly pulling at each other and huddling together at the end of the run seems to be so much fun. Oblivious to sweat gleaming on the temples, and trickling down the nape, the drying lips and the parching throats, they are engrossed in play. Soon the little body start sending signals to run to a water spout – Sarvajal’s safely housed purification plant and the water dispensed at the right height for children welcomes them. The sight of children in a row cupping their palms to drink from the flowing stream of water from the tap, with steady gulping sounds, with an ‘ah!’that puts a satisfying end to that perfect drink,wiping the lingering water from their faces with the back of their little hands, is heartening. The water quenches their thirst and their wet palm cools their face. The satiated look on the face of these little ones is precisely why Sarvajal is here. 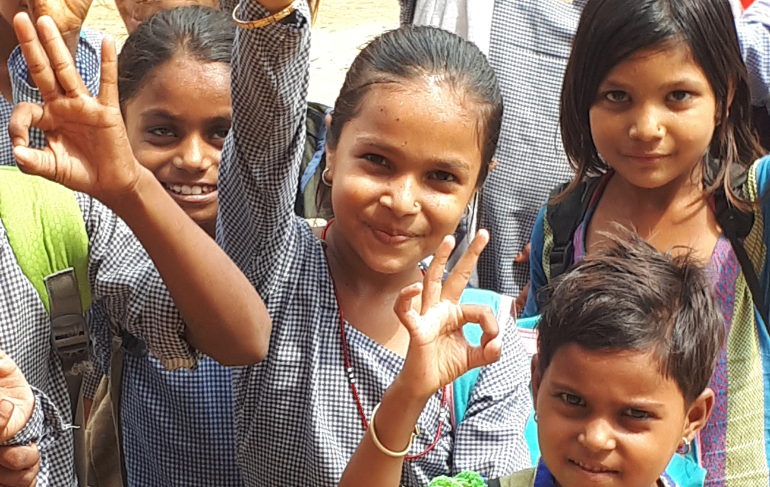 While this plant is located in the primary section of the school, opportunity to serve is doubled since the premises also houses higher secondary school which has around 250 students studentsthe benefit of access of safe drinking water also can be utilized by these adolescent girls. 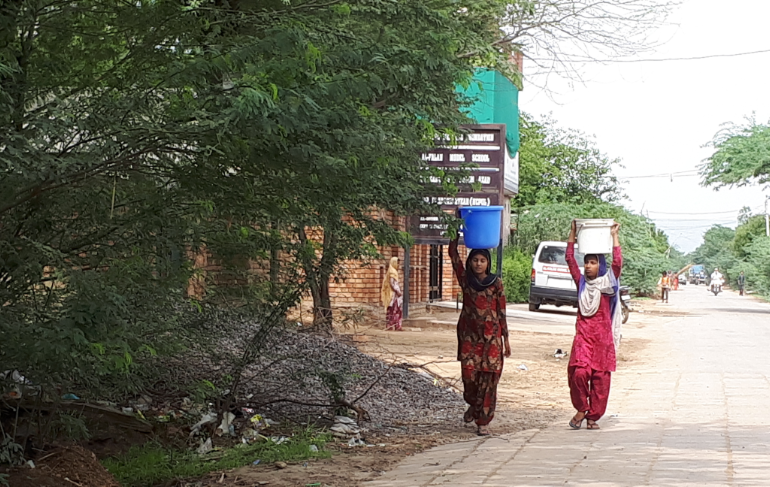 Mrs. Alka, Teacher of class two added “Children bring two bottles each day in summers, heavy on their backs – and as you see it is hot and sultry – two bottles are over in no time, children are thirsty soon and in this heat they get tired fast and they are not attentive. With the water plant in the premises children need to bring just one bottle and refill it through the day during the breaks.’’

The community awareness team visits this school once a month and works with the children to help them understand why they need to drink safe water, drink more water and how water can help them become smarter. This also includes early lessons of self-discipline by way of helping the children go in a line to take water and to get back to class as soon as it is done. They are also encouraged to take water in their bottle when they return home. Through variety of participatory methodology like singing,dancing, drawing and drama with simple messages, the team engages the children.

Every child has been given a blue bottle, so that they will continue to have water in the class room and there is more time in the class to learn new things. 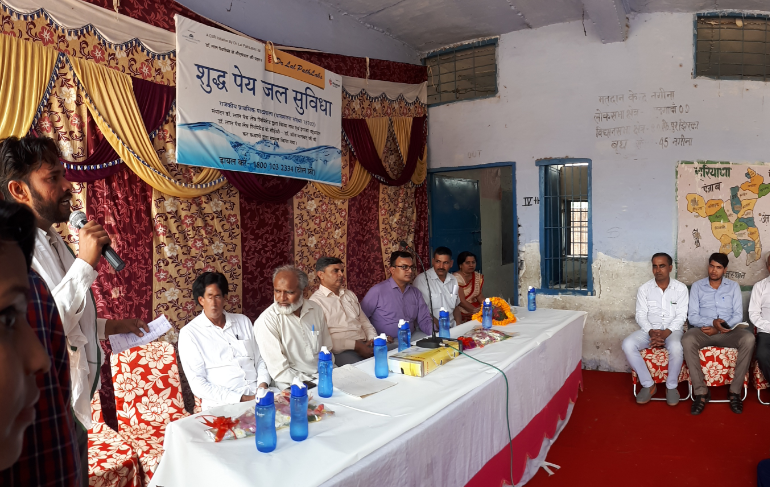 Many a reason to keep a child from school, water should never be one!

When private schools distinguish between the world of haves and have-nots, Government schools hold the safety net for every child who has already fallen through the sieves of privilege and fortune. While the opportunity to serve girls resonates at the hearts, not to forget are the boys who are here due to social and economic situations of their parents. Among those girls and boys are many who have stunted growth due to nutritional deficiencies, many living with conditions attributed at birth and many differentially abled- the school with its minimum facilities have welcomed them and is providing them education.

Safe water can keep them in good health, prevent them from falling ill with water borne illness, help children achieve some of their developmental milestones, continue to study and rise above their current predicament – support them to have a dream and pursue it. 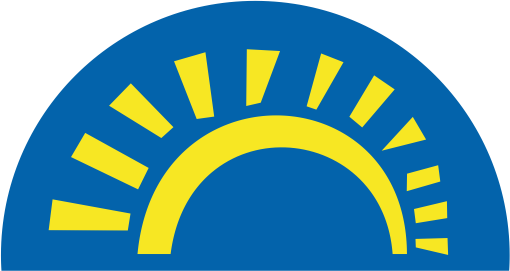