We are Operators – Story of Three Women

In Sarvajal, an operator’s job has always been a male strong hold. This year (2019)however, as an impetus to create equal opportunities for women in this realm, we have employed women as operators in three places. The operators are closest to the community in which we serve safe drinking water, they are the ones who binds us to the community and help us build trust and overcome local challenge. In Tamil Nadu, Operators also are entrusted the responsibility of building community’s knowledge about drinking water. 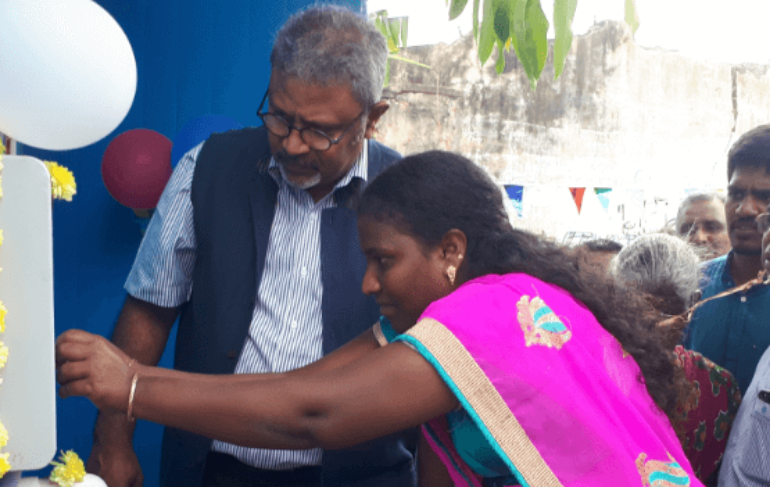 Vennila hails from a place called Irukkam where the water is tasty…You take a boat to reach our place, she remembered. Eighteen years ago when she was married, she moved to Kattur, her husband’s place. He husband runs a tea shop. The family also have some land that they cultivate various crops on. Nothing worth a mention and nothing could take the family out of the debts, she sighed. She found odd jobs to do to supplement the meagre income. The last one was that of a cashier at the Electricity Board, which was a leave vacancy. Soon the time had come for her to hand the job back to its owner who returned after leave. She was out of a job again.

She has studied till 8th standard, but Kattur being a remote village did ßßaa offer anything in terms of work other than the hundred days work scheme which has the entire village competing for. Now, her son is in the 3rd year of college and her daughter is doing her 11th grade. Last October, there was talk of the water ATM plant being set up in Kattur village. She was identified for the Operator job by a village water committee member. She had handled cash, but had not handled technology. However, after speaking to the team from Sarvajal, she was confident that she could learn it – she was willing to stretch herself for a job.

Naren, Junior Field Engineer (JFE) from Sarvajal spent time teaching her to operate the machine and the recharge cards. I don’t know English, but JFE brother went over and over again to teach me the process. Initially it was difficult as I could not remember the sequence and my mind would go blank. JFE brother was a strict teacher. I soon realised that only because he was strict, I was even putting the effort, if not, I would not have learnt to recharge the cards. He did help me for a week after too, She recalls.

My routine starts with filling the tank and helping people who come to the ATM from 7.30 in the morning to 11.00 a.m. I go into the village for enrolling people as members. I go home for lunch and return at 3.00 p.m. and I am here till 7.30 p.m. This routine is convenient. If anybody needs me otherwise they do call me and I can be at the water plant in minutes. When I need help I call the JFE brother.

This job has given me three things that I wanted a) a workplace near my house, I have got it now. b) I like helping people, and serving water is the best that I can do as service and c) I make friends quickly and I know this village well. People trust me and would listen when I talk to them about the new water ATM. They would hand over the money for membership without thinking twice about it.

With the agriculture and the tea shop, it was hard to make ends meet. Now, being an operator, I will be able to ensure a steady income for my family. My children can continue to pursue their education.

Water from ATM is tasty …just like that from my mom’s village. After drinking salt water for the last 18 years, this water plant has brought us good water. 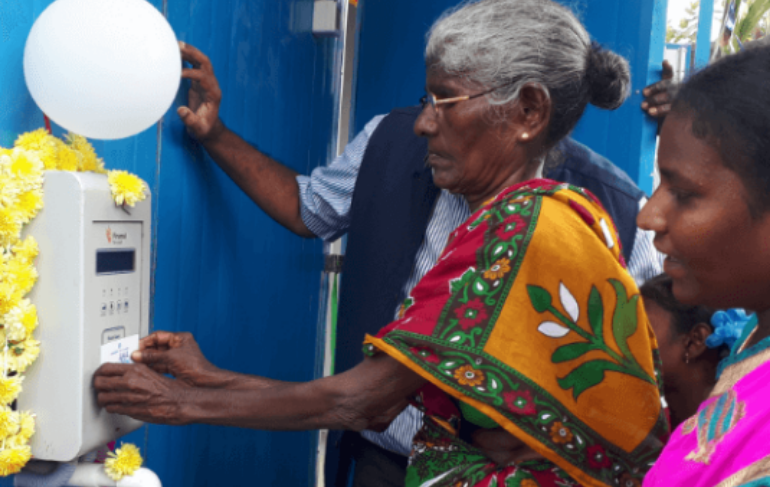 Kannagi is a powerful Tamil folklore heroine who burnt the city of Madurai for her husband was wrongly sentenced to death by the King. Our Kannagi, her namesake, took this job to be able to be closer to her husband who was disabled due to a motor accident 2 years back. Her house is just three houses away from the Sarvajal plant.

She studied till class 10 and moved to Kattur colony 13 years back at a tender age of 16. Her husband used to work at the Ennore Foundary and earned enough to take care of his family. She had her children, a boy and a girl one soon after. She never went out to work. Her Husband’s expertise in cooking, lead him to doing wedding-catering, as per invitation. The income helped live life comfortably. He was returning from one such venture riding pillion with a close friend, when a car rode into them from behind causing the accident which incapacitated him. The family spent a lot on his treatment draining all their resources. The situation presented Kannagi with the compulsion to earn for the family. She tried through the 100-days-work-scheme, but then she had to rely on her mother to take care of her husband. She also did work as a sanitation worker, but this took her away from her husband.

When village water committee was constituted they were looking for a woman who can take up the operator’s job and the committee members were interested in her profile. Someone who is reliable would have to operate the machine and build the membership. The operator has to be around to ensure that water is available for people to take. They felt her education would allow her to pick up the skills necessary for job. They were sure that the family deserved at least one earning member. They entrusted her the job in consultation with team members of Sarvajal. When she was asked to use the phone to send some messages, she was not able to, at first. But in a week’s time she learnt that. She also learnt to operate the machine.

She says she likes the job because it allows her to be around when her husband needed her. She would be able to now pay for the hospital visits herself. Above all, she feels that she will be able to build a toilet in her house which would give them dignity. They are presently using the public conveniance…a toilet of their own would ease their life. Kannagi feels that she is in control of her life and is willing to learn anything to keep the security of her family. 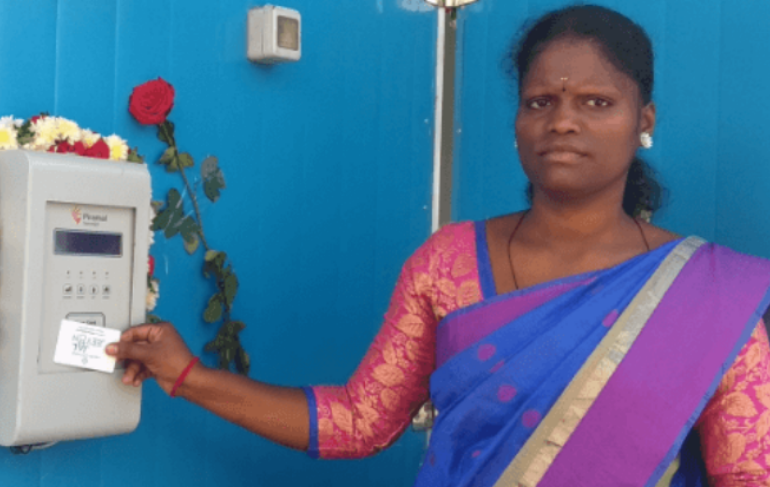 Chaklapalli is a beautiful village far from the hustle and bustle of Hosur, burst with roses, the horticulture farms that exports flowers to markets and perfumeries in Europe. Valentine’s day promises good business in this part of rural Tamil Nadu. A bus drive takes you through the picturesque setting and weather that is reminiscent of a hill station.

Here, the Sarvajal plant was operational on February 8, 2019. Vishupriya, called fondly as Priya, was identified by the headmaster of the Chaklapalli Government middle school, to take on the role of the operator. She hails from a humble background. Her father works as the person who gives water from the panchayat, a duty which fell on priya and her mother as he took to drinking heavily. The duo continues to operate on his behalf.

Priya lives with her parents as she is the younger of the two siblings. Her sister is married. She stopped her studies after 12th due to financial issues, but the school offered her a teaching position and allowed her to pursue her degree. She graduated in Tamil Literature and is currently doing her B.Ed.

Priya was part of the first meeting at the school premises to constitute the village water committee where Sarvajal’s team explained about the project. She was happy that the Operator job was assigned to her. Her colleagues and friends discouraged her, but she felt strongly about doing the work of an Operator. Giving water was what she and her mother did even though her father got into drinking. It was something that allowed her to live a life of dignity.

Priya was teaching all subjects in middle school and was always in the company of children of her class. Sitting in the water plant all alone for two days was strange. She found her peace when she realised many people who were becoming members from her village could not append their signatures. She spent time at the plant and also taught them how to put their signatures. It was very satisfying. She would continue providing tuitions for children after she leaves the plant. That way she thinks she will be able to utilise her skills in being a teacher.

Many people in the village did not understand the benefit of drinking purified water, so I have started talking to people about the benefits. There are 65 people who have become members. Earlier, there was only one person which had a domestic water purifier in his house. I think it is a good change where more people are becoming aware of it. She feels she is imparting knowledge just like any teacher would.

Some people who called me ‘teacher’ earlier, tease me by calling me ‘Operator madam’. Let them call me anything, I chose this job. They have someone or the other to support them, but I have just me and I am determined to take care of my family. I continue to be the provider of water. It is life just like education is. I don’t want to think about which one is better. I get my life by giving life… I only pray for strength to do this better.

When opportunities are present to women who have not handled technology, their progress from the offer -to -training- to -taking -over may be gradual, but once the level of effort is understood , it becomes methodical and reliable. Women as operators want to stay ahead in the knowledge required to discharge their duties and they are not shy to say that they did not understand something. Along with the skills, they bring into these workplace, care for the machines, the cleanliness of the premises, and a drive to reach out to the communities.
Content Source